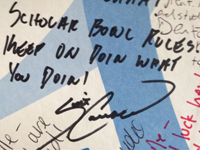 Starting the 2020-21 school year, MSHSAA replaced the 35-percent multiplier applied to nonpublic schools with the Championship Factor, whereby district titles and state trophies from the six most recent years score points toward determining whether a nonpublic school is promoted as many as two classes. The rankings are as follows:

You may also recall that this was implemented alongside annual reclassification (instead of the previous two-year cycle) and doing away with the practice of doubling the population of single-gender schools when it comes to classifying programs for scholar bowl and music. (The latter also applies to speech/debate/forensics, but they only have one class of competition.)

I'll factor the past weekend's district championships in a follow-up post to determine who might be moving where next season.
Last edited by L-Town Expatriate on Mon Apr 11, 2022 2:47 pm, edited 3 times in total.
Top
Online

Championship Factor status heading into 2022-23 year (increase or decrease from this year):